Cooking around the world seasonally with Spanish oranges, fresh from the farmer’s market in Seville

An issue that really started to disturb me during the last year that I was living in the U.K. was our dependence on supermarkets and chain stores. It still does deeply concern me that the mentality of the masses is to ‘buy it all under one roof’ and the general disinterest to help the ‘Average Joe’ baker/butcher/newsstand owner came to concern me.

After seeing many documentaries on the matter and reading the unnerving Tescopoly, which uncovers the negative impacts of “supermarket power,” I decided to change my shopping patterns. Supermarkets are slowly gaining ground across Europe, but I have noticed that it is not as obvious in Spain. Every barrio has its spattering of supermarkets,  but there are also many family-run enterprises. And if you venture to them early in the morning, especially on a Saturday, there is almost always a queue at least four-people deep. Maybe it’s because the older generation mamas are still stay-at-home wives, or they just prefer to put their Euros in Señor Sánchez’s pocket rather than Mr. Mercadona’s vault. Whatever the reason, I wouldn’t want it any other way, and find the level of community warming. I thoroughly enjoy being able to stop and have a chat with marketstall merchants, and of course buying the fresh, in-season produce too. I have become accustomed to buying fruits and vegetables that actually taste like they should.

After living, cooking and tasting in Seville for two and a half years, I have grown accustomed to knowing what produce is seasonally ‘in’ and what is ‘not’. I know that I can’t expect to buy a watermelon in December. I have learned to adjust to what is available.

During these winter months, Seville’s markets offer a wealth of variety: wild mushrooms from the nearby Sierras, tagarninas (thistle-like shrubbery) and wild, bitter-tasting asparagus. But the most prominent feature are those round, vibrant-coloured boules, synonymous with Seville: oranges! The streets are lined with naranjos, or orange trees, at this time of year – but don’t get caught in the guiri trap – they are not edible and not even worthy of being turned into mermelade! Do, however, stock up from the market (I use the Mercado Puerta de la Carne). You will be astonished by the offers.

If that were not enough to whet your appetite, here’s a ‘season-friendly’ recipe for orange biscuits.

Mix flour, yeast, salt, sugar and zest in a bowl.

When mixed, wrap in cling film and put in the refrigerator for 30 minutes.

Remove, roll out and cut into the desired shape.

Bake in oven for about 8 to 10 minutes, or until golden. 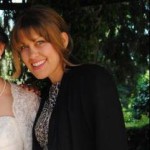