When the automated voice of Google Maps unexpectedly pierced the silence stating that we had arrived at our destination, Simona DeVilliers veered onto the narrow shoulder of the winding mountain road and slammed on the brakes. Thankful for the opportunity to stretch our legs after the three hour journey from Sibiu we jumped out of the Skoda without hesitation. I’d met Simona two years ago in London although she is originally native to Romania, and fortune dawned on me the morning she agreed to venture at my side through Transylvania in search of Vlad Dracula’s mysterious Poenari fortress.

Our initial attention was drawn upwards as our eyes strained through the mist and thick branches of the Carpathian Mountain vegetation to catch sight of Poenari Castle, which was reportedly perched on the cliff top overheard. I heard this place was difficult to get to but I had no idea rock climbing equipment was a pre requisite, I thought as we searched in vain for an opening in the mountain face. Five minutes later we grudgingly returning to the car defeated, pulled a U Turn, and backtracked 5 kilometres in hopes the lodge we had passed could provide better directions. Around this time is when I began to understand the reason for the lack of touristic attention that Poenari draws, despite its claim to fame as the most beloved abode of Vlad III, commonly known as Vlad Dracula, which translates from Romanian to ‘Vlad the Devil’.

Bram Stoker, the talented 18th century Irish novelist, brought international recognition to Vlad III when his imagination took legends of the ruthless 15th century ruler to the next level, creating a monster that instilled horror across far reaches of the globe.

You may also like: Chocolate And Castles In Astorga, Spain

The success and popularity his novel Dracula in 1897, generated worldwide connotation to Vlad Dracula’s name and a bloodthirsty vampire. Although it was in its entirety a work of fiction, the historical accounts of Vlad III recounted tales if not as equally gruesome, painting his character as a merciless slayer with a penchant for bloodshed. However, the credibility of these documents remain under the scrutiny of historians who believe many of the accounts to be exaggerated tales told by Vlad Dracula’s enemies to inspire feelings of animosity towards him.

It is estimated Vlad Dracula was born between 1428-1431, as the son of Vlad II, who was then Prince of Wallachia. Life was difficult during the 15th century and Vlad’s was no exception. In 1442, he and his brother Radu were captured and held prisoner by Sultan Murad II, ruler of the Ottoman Empire at the time, as a means to ensure obedience from their father. The confinement lasted until the Hungarians invaded Wallachia 5 years later, slaughtering Vlad II and his eldest son in an unforgiving battle. During their captivity, Murad II recognised the advantage to having the next in line to the Wallachian throne under his thumb at such a young and susceptible age. Instead of cramming them in a damp cell and feeding them meagre rations of rotten potatoes he attempted an alternative form of control: brainwashing. Under his watchful eye, he raised the young boys as if they were his own; he educated them, encouraged them to forge bonds with his people, and even taught them the art of warfare (when it is rumoured Vlad first learned his famed method of execution: impalement). Operation Stockholm syndrome was 50% successful; Radu converted to Islam and joined the Ottoman Empire, while Vlad exited captivity with a heightened passion for vengeance. A hatred so strong it drove him to forgive and join forces with the Hungarians as he took his rightful place on the Wallachian throne in 1448.

Vlad Dracula ruled Wallachia as viciously as a lion would rule the savannah. Crafting his utopian army, he impaled anyone that defied him or demonstrated qualities he loathed such as thievery and dishonesty. Not only did he use impalement as a form of execution but Vlad strategically let cadavers rot on permanent speared displays outside his fortress walls to serve as a threat to his enemies and a precaution to anyone contemplating his betrayal.

Perhaps he drew to psychological warfare subconsciously after years of exposure to it during his time in captivity by Muhad II, but for right or wrong, there is no debate that his tactics were wildly effective in securing him the worship of his followers and mustering fear in his enemies.

After Vlad III’s rise to power, Mehmet II took reign of the Ottoman Empire and led his army into Wallachia to take control of the capital city, Targoviste. Vlad III had been warned of the attack and evacuated the city, leaving behind the impaled bodies of the Ottoman Prisoners of War as a welcome gift for Mehmet II to feast his eyes on. Disturbed yet resilient, Mehmet remained ardent in his determination to slay Vlad III. As the siege continued Vlad III launched a surprise raid on Mehmet II’s army camp, commanding his men sport the dress of the Ottoman uniform. Encumbered by poor visibility under the cloak of night and their groggy state after the rude awakening, The Turks began slaughtering their own men in mass confusion. Mehmet II acknowledged defeat and retreated shortly afterwards, allowing Vlad III to continue rule of his domain.

Vlad resided in various castles throughout his reign, yet historians agree that Poenari Castle was most sacred to him and his first wife Jusztina Szilagyi. The couple shared an immense abhorrence of the Ottoman Empire for when the Turks next attacked Wallachia in 1462, it is rumoured Jusztina leapt to her death from the top of the tower into the Anges River below, crying out that she would rather die than fall prisoner to the them. In a surprise twist, it turned out to be Vlad’s very own inculcated brother Radu leading the siege for the Ottoman Empire. Radu triumphed control of Poenari Castle that night, but Vlad III escaped through a secret tunnel that led him to fend the bitter wind of the Carpathian Mountains. Learning the rich history of Poenari Castle I was adamant that this was the site to visit over Vlad III’s other domiciles including Bran Castle, which has now been termed as Dracula’s Castle to draw widespread tourism. The effort to associate Bran Castle as Vlad III’s main fortress can be attributed to two important factors: the first being that it is easy to reach- ideally situated off highway E574 and without a strenuous climb required to reach the entrance. The second and most paramount reason is that the castle is still intact, allowing the less imaginative to perceive a replica of how the castle would have appeared in the 15th century, and in turn creating much less of a safety hazard to a bounty of international camera-equipped visitors.

You may also like: Munich Day Trip to Neuschwanstein Castle

Determined to overcome the tourist trap of Bran Castle, I had my heart set on discovering Poenari. In my case the discovery was greatly assisted by the generosity of Simona’s family lending us their car for the day and her familiarity with navigating the Romanian roads. However for the average traveller, public transportation is virtually non-existent to Poenari and the roads can prove a difficult feat for those who would brave them from the driver’s seat. At various points throughout our journey from Sibiu to Poenari we encountered roads only accessible by 4WD (certainly not suitable for a Skoda), tailgaters yelling curses in Romanian, the same tailgaters daring passes on the one-lane roads whilst playing chicken with oncoming semi-trucks as if they were Vin Diesel in Fast and the Furious, and sporadic donkey crossings. As for the climb to the fortress itself, Vlad Dracula was praised for his ingenious at recognising the ultimate potential of the fortress’s location, and there was certainly no oversight here. We were having enough difficulty climbing the newly installed 1,482 perfectly manicured switchback stairs to the castle, I couldn’t fathom what it would be like to face the near vertical scramble in full armour, whilst dodging arrows, and then having to proceed directly into a battle for your life at the top.

When the staircase finally ceased Poenari revealed itself through the low cloud line. I say in all sincerity that it presents a most unwelcoming sight, for just to the right of the entrance two large spears stand vertically, thrusted deep into the ground to support the weight of the two corpses pierced through them as though they were chicken on a barbecue skewer. Today they are but mannequins smeared in red paint that serve as a replica display of Vlad’s favourite form of execution to warn off enemies (but perhaps now they are frightening off tourists). Next to them sits a decapitation block which Vlad III strategically placed in case invaders missed the first message. As for the structure itself- only a fraction of it remains, as there has been minimal maintenance over the centuries. In 1888 an earthquake devastated the stronghold collapsing the famed tower and sending its walls crumbling into the Anges River en suite of Vlad III’s first wife. The foundation remained enact however, enabling me to imagine the castle in its full glory as I walked through the walls, and the lack of structure in this instance provides the advantage to enjoying breathtaking views of the Transylvanian countryside in every direction.

Poenari was worth every minute of my time, if not for the off-the-beaten-track adventure, for the chance to put myself in the exact spot that captured the heart of Vlad Dracula, a name I had heard so frequently throughout my life but one I had done little to educate myself on. A name which I now feel even greater appreciation for, understanding the complexity of his life yet still wishing there was further documentation validating the truth to his complex history. One fact that can be guaranteed is that Vlad III was a man of debate. To his enemies he was the devil, to his loyals he was the greatest and most fearless ruler of the time, to Bram Stoker- a bloodthirsty vampire, but to most (and not dissimilar to his prized fortress lying silently in the heart of the Carpathian Mountains) he will forever remain a mystery.

A View, Survival and Sancerre Wine
Japan: The Island of Miyajima
Tips for a European Road Trip in Germany
Jaipur, India: A City that’s Pretty in Pink 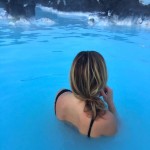 Lenai has travelled to over 45 countries and lived on 4 continents in the space of 4 years. Europe remains her absolute favourite for it's romantic allure, and she has never felt as moved as when she submersed myself in the exquisite countryside of Romania. Follow her journey at Live Like Lenai.