Snow and minus temperatures in Norway? Who would have thought! If you are lucky enough to spend some time in Oslo during the winter months, you won’t be stuck for things to do.

Snow season is a great time to visit the capital and wrapping up is 100% recommended as it can be literally freezing. Dig out your fleeces and favourite bobble hats and get exploring all the city has to offer!

Go to the ice-skating rinks

Spikersuppa is an outdoor rink in the centre of the city which is free to skate on whenever it has been cold enough to have frozen over! Skates can be hired from the small station nearby, so it makes it really handy. If you want an authentic ice-rink and it’s cold enough you could get the full experience and skate on a frozen lake in the Oslo forests. 10cm is how deep the ice needs to be before its safe, although how you measure that is a mystery.

Walk on the roof of the opera house For a great view of the city and something a bit different to do, take the short walk up the opera house and walk along the roof. The shape of the building and intention of the walk is to make people look like penguins on an iceberg. The sculpture that you see in the water moves with the tides and the wind so if you visit several times it is likely to change location.

You may also like: Awesome road trips in Norway

Visit the biggest sculpture park created by one artist Not your average walk in the park being surrounded by over 200 sculptures but still fun to see and walk around. There are old red telephone boxes dotted in the park too which look so good in the snow.

Rent a sledge and try tobogganing

The most popular run is Korketrekkeren which is a 2km run known as the cork screw. For a fun activity you should definitely try it, especially when there’s been fresh snow. Oslo has many hills so there are lots of alternative places to try sledging. You don’t always have to have a sledge either, most things plastic will do. Make your way to the area of Holmenkollen and see the huge ski jumping hill. Whether its winter sports events you are interested in or just having a look at what’s around you won’t want to miss seeing it. In the evening’s it is likely to be empty so take a peak into the stands and up the inside of the jump to see the scale of it. In the day you can go inside the ski museum and go to the viewing platform.

You may also like: Ultimate cruises in the Artic

Walk around the Royal Palace grounds At the end of Karl Johan’s gate, you will find the Royal Palace. Take a walk around the grounds and see if you can see the gardener with a snow blower! The grounds are popular with local children enjoying the steeper areas with their simple versions of a sledge.

There are also a few colourful pieces of art in the gardens too!

Not everything has to be outdoors though, as there are plenty of other things to do which will keep you warm and entertained indoors. From colourful café’s, to museums, to public spaces, you name it they have it.

The main areas are around Karl Johan’s Gate which is the main street in the city running from central station to the palace, passing the parliament building and cathedral along the way, and the harbour area. You can take a look inside the city hall which is now the Nobel Peace Prize venue, so you can visualise the ceremony and see where it all happens.

TIP: Public transport is really warm and efficient. It is so easy to navigate and get yourself from A to B. The 24-hour pass allow you to use the metro’s, trams and even some of the boats if you wanted to take a tour around some of the islands close by. All the things to do listed above we accessible using two day passes.

Oslo in the winter is absolutely beautiful! No doubt it is in the summer time too, but with fresh snow on the ground and many activities to do it makes a winter city break with a difference.

Tracing the Footsteps of Vlad Dracula Into the Rui...
Cunard Celebrates the QM2's 200th Transatlantic Cr...
A Low Cost Getaway to Kennebunkport, Maine
What Vidalia Onions and French Champagne Have in C... 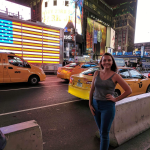 Nicola is a 22 year old Law graduate from the U.K. slowly but surely scratching countries and new destinations off the map. After inter-railing around Europe, feeding elephants in Thailand, wandering the streets of Prague, climbing up Mount Kilimanjaro, swimming in Iceland's Blue Lagoon, life-guarding in the U.S.A. and camping on an African safari, Travel Happy Blog became the home to lists / tips / diaries / photos from all her adventures!!