The body becomes the canvas for rich, henna art in Morocco

“Khadijah wants to henna your hands,“ Aziz translated for me. It was a caught in the headlights moment, as getting my hands hennaed was only slightly above being held captive in Western Sahara for my last few days in Morocco.

Once glance at Khadijah, however, melted any resistance. She was a young 20-year old mother, from an isolated Berber village high in the Atlas Mountains and it was important to her. A nod and her face lit up. Aziz – who was 37 and spoke Berber, Arabic, French and English fluently – and Khadijad had married a year earlier. The plan was that Khadijah was going to get an education and then the two of them get jobs overseas. Tiliaf’s arrival, however, changed those plans. They lived in Rabat, Morocco’s capital city, where Aziz had a teaching job.

Aziz and I finished off the wine and solved a few more problems of the world. Just as we got to the bottom of the glasses, Khadijah appeared holding a bowl in one hand and stirring it with the other. The earthy smell of henna mixed with warm water wafted through the room.

Khadija sat at my feet and in sign language, told me to take off my rings. Giggling slightly she put a large dollop of henna on my right hand and then closed my fingers over it. Next, it was the left hand. Reaching into the pocket on her jalaba, she produced some masking tape and a couple of plastic bags. She taped my fingers to my palms and then put a bag on each hand and secured them to my wrists.

“Leave the bags on for as long as you can,” Asiz advised me.

I cautiously lowered myself onto the sofa bed and went to sleep to the sound of crinkling plastic. Having a small bladder, though, sleeping through the night is rare. About 4:30 a.m., I opened one eye and then the other and remembered where I was. Bending my bagged hands at the elbow, I cautiously set out for the bathroom. The corridor was dark, but eventually, I grouped my way there. The reality of the situation dictated that I undo the bags, as there was no other way to accomplish the task.

Ripping the bag off my left hand with my teeth, I still had to get the tape off from around my fingers. I momentarily had a vision of looking like a fox trying to gnaw off her arm to escape. Eventually, my still-clenched hands were free. Slowly I opened first one and then the other hand and deposited the henna into the plastic bags. Running water over the hands, I waited until it ran clean and then washed briskly with soap.

The pattern – the color of rich terracotta – had embedded itself into my palms in an interesting design. Up until now I’d never paid much attention to the art and dismissed it as it looked as though someone had played in the mud. When I studied it though, I began to appreciate what people saw in it.

After breakfast, I thanked Khadijah and headed back to Casablanca. Through Aziz I let her know that she had expanded my cultural horizons. When asked how long it would last Aziz said about a month. Actually, it was closer to two.

My Moroccan friends approved. “Oh, your hands look so beautiful. And it is such a wonderful Berber pattern,” gushed Sana, my adopted little sister. At my final party at the Churchill Club, I got a lot of compliments on the artwork. Khadijah had done a good job.

Three days later I was on the plane to central Canada. Shortly after I arrived at my parents’ I was talking with my sister.

I replied with a sniff and proceeded to deliver a cultural lecture to an audience that was ignoring me, and waxed eloquently about how it was an ancient art and that even boys had their hands hennaed the night before their circumcision ceremony.

“What on earth happened to your hands?” she gasped.

“What do you mean ‘happened to?’ I replied in a disdainful tone, waving my hands in the air for all to see. “Don’t you realize that this is living Berber art?”

“Yeah, well maybe,” injected my brother, “but it looks like you stuck your paws in iodine.”

I replied with a sniff and proceeded to deliver a cultural lecture to an audience that was ignoring me, and waxed eloquently about how it was an ancient art and that even boys had their hands hennaed the night before their circumcision ceremony.

A week later I arrived in Santiago, Chile, my new home. The color had started to fade a bit, but it was still a dark reddish-brown. I caught the Chileans – from the people at customs to those in cafés – quietly stealing glances at the palms of my hands. They were too polite to ask; my Spanish was too bad to even try to explain, so the only thing to do was leave it alone.

Leaving Casablanca, Morocco after 18 months wearing the culture proved to be a wonderful way to make the transition. Eventually, my skin tone returned to normal. But when that happened I felt as though I’d lost a henna friend.

Around the Belle-es-sphere: March Edition
Are the Best Parts of Travel found in the Small Di...
Across the Cafe Table: Solo Travel
The Most Popular Private Jet Routes Around the Wor... 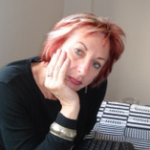